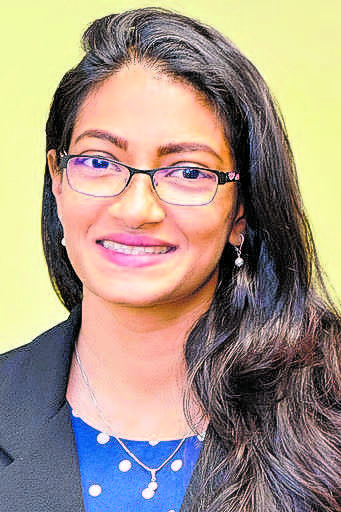 Scholar at the University of the West Indies Dr Bephyer Parey.

NEXT IMAGE
Poverty and disability linked says UWI scholar
RADHICA DE SILVA - radhica.sookraj@guardian.co.tt
Facing the possibility of a global recession, rising food prices and an ageing population, a scholar at the University of the West Indies, Dr Bephyer Parey wants more to be done to protect the disabled population, particularly children and the elderly.

Speaking at a virtual seminar titled Disability and Poverty in Trinidad last Friday, Dr Parey said her research shows a clear link between poverty and disability in T&T.

Saying research should lead to the formulation of policy, Dr Parey called for the professional development of teachers which will facilitate the inclusion of children with different learning capabilities.

She also called for the provision of better accommodation at schools and workplaces.

She noted that less than one per cent of primary schools had trained special education teachers.

“Secondary schools had none.

No school had paraprofessional staff such as occupational therapists, speech therapists and physiotherapists. And just one per cent of secondary schools had a sign language interpreter,” she added.

She said there was also a need for consideration to be given to relatives’ needs in the provision of home care.

Although there is the Geriatric Adolescent Partnership Programme (GAPP), Dr Parey said not every low-income household had access to this programme, adding, “The effectiveness of this programme needs to be researched.”

She noted that the standard of living enjoyed by disabled elderly people was influenced by relatives, income and geography.

Dr Parey also revealed that there were a lot of children who were not attending regular schools.

“The main reason for exclusion from regular schools was the lack of accommodations,” she added.

While advocacy groups existed, Dr Parey said it was important for people with disabilities to speak up for themselves.

“Persons with disabilities know they are going through situations.

They should voice their concerns. Self-advocacy is an important aspect of change and I hope that persons with disabilities feel more empowered to say more about the issues they are experiencing,” she added.

She also called on corporate T&T to become more inclusive in hiring people with disabilities, noting if this is done, it will impact positively on poverty levels.