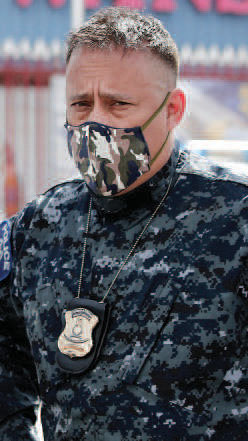 
The legal dispute between suspended acting Police Commissioner Gary Griffith and the Police Service Commission (PSC) took an unexpected turn yesterday afternoon, with the parties reportedly coming to a settlement.

Guardian Media was reliably informed that the legal teams for both parties were locked in negotiations over the finer details of the agreement up to late yesterday.

However, legal sources said that as part of the settlement, the suspension against Griffith, issued by the commission last Friday, will be lifted and Griffith will withdraw his ongoing lawsuit over the decision.

Despite this, legal sources said that Griffith’s return to the post will be short-lived, as he has agreed to resign in order to correct a legal error committed by the commission when it granted him the acting appointment after his three-year stint in the post ended in mid-August.

The commission will then possibly use the correct process under the Constitution to put forward Griffith to be reappointed as acting police commissioner, which includes the requirement of parliamentary approval.

Guardian Media understands that that procedure may render social activist Ravi Balgobin Maharaj’s interpretation lawsuit, over the wrong process being used by the PSC to grant Griffith the acting appointment in the first place, academic.

The development reportedly came hours after High Court Judges Nadia Kangaloo and Ricky Rahim agreed that one judge (Kangaloo) should hear both cases over the issue.

Even if the settlement is ratified and Parliament eventually approves Griffith being granted the acting appointment, the commission is still barred from completing the recruitment process for the substantive post by an injunction obtained by Senior Superintendent Anand Ramesar, who is challenging the PSC’s decision to not progress him to the interview stage of the process.

Ramesar’s injunction stays in place until October 24, when High Court Judge Joan Charles will decide whether to lift it or extend it pending her determination of the case.