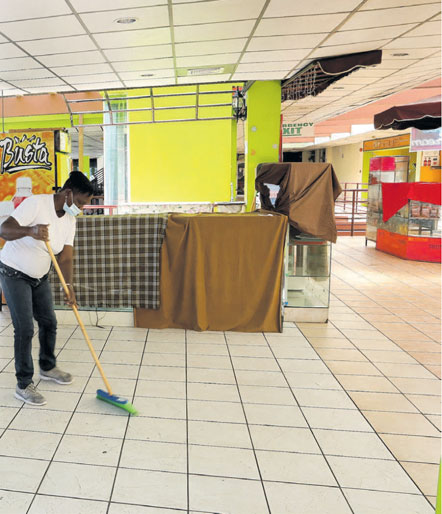 Cavell Bernard cleans the floor of the food court at RRM Plaza, High Street, San Fernando, as they prepare to open on Monday.
PREVIOUS IMAGE

Preparation is underway for the reopening of the retail sector next week but the Confederation of Regional Business Chamber says 6,000 businesses around the country will remain permanently closed as a result of the fallout from the COVID-19 lockdown.

Co-ordinator of the confederation Jai Leladharsingh told Guardian Media yesterday that based on a survey done by the organisation, about 6,000 out of 17,000 small and medium enterprises are facing economic decimation.

“Based on a survey that the confederation did, I say 6,000 businesses are going to permanently shut their doors. Restaurants, inhouse dining (establishments), spas, beauty salons. It is sad, especially because many of these businesses are run by women. They need some help,” Leladharsingh said.

He added, “The Ministry of Legal Affairs says there are 28,000 registered businesses in T&T. This is the formal sector, but there is also a large informal sector that has to be studied.

Noting that the $300 million tranche given to commercial banks to assist SMEs was underutilised, Leladharsingh said many felt it was an entrapment.

He urged the Government to offer cheques to small business owners so that they could retool, restock and rehire employees.

“Businesses need technical assistance and capital. We have the Heritage and Stabilisation Fund.

The Government could take out US$500 million, get the cheques in hands of business owners. The cheques come with conditions to re-employ. They could work with charitable institutions like TML, the Maha Sabha to help families.

The Heritage Fund belongs to the people of T&T and is not to be used only to pay public servants salaries,” Leladharsingh said.

He noted that these cheques could be given with conditionalities and strict monitoring could be done to ensure that the monies are effectively used to stimulate businesses.

Meanwhile, president of the Greater San Fernando Chamber of Commerce Kiran Singh, said 25 per cent of businesses in San Fernando will also remain permanently closed when the sector reopens. This represents about 200 businesses in and around the Southern city, Singh said.

“We continue to bear the brunt of this economic burden. If we did not reopen on Monday we would have seen more closure. With the reopening, we expect to see employment figures rising gradually,” he added.

He also called on the Government to make VAT refunds available to business owners.

“We suggested the 300 million tranche given to commercial banks be used for VAT refunds. We understand about two-thirds of that tranche has not been picked up by the SME sector. We know that the Government is cash-strapped but they can alleviate the financial strain on businesses by utilising these funds and making funds available as VAT refunds to be used immediately to restock and do upgrades and maintenance of their enterprises,” he said.

Over the past 17 months, business owners have been doing door-to-door sales, as well as online sales and orders to make ends meet. Kelvin Levine, who owns Elite Wireless, said he drove as far as Chaguaramas to deliver orders.

He said when it comes to the pandemic, business owners have been doing everything possible to stay afloat.

“Seventy per cent of our staff were at home and we are happy that the sector is finally being opened so we can bring back out our staff,” Levine said.

He called on the Government to provide favourable loans to entrepreneurs so that they can get back into business.

Earlier this month, businessman Omar Hadeed, who said he was the voice of the recently formed Retailers Association, told the Business Guardian that close to 20 per cent of retailers had closed and another 20 to 25 per cent are also expected to shut their doors by the end of this month if the green light was not given to reopen “in a matter of days.”

He too said the retail sector had been decimated over the past 15 months and painted a grim future of the sector if solutions were not immediately implemented.

“It’s been a difficult period over the past year for most retailers who have just been doing their best to survive. Their cash flow would have been depleted significantly going into this present lockdown,” Hadeed explained then.

Downtown Owners and Merchants Association president Gregory Aboud told Guardian Media that the statistic provided by Leladharsingh was higher than he expected.

He said in the capital city, just about ten to 15 per cent of businesses have been permanently shut.

“It seems to me to be a far higher number than I would have expected and I would not be able to comment as I have not seen the details of the survey done, but I would not be surprised if it was as many as that,” Aboud said.

“We are seeing most of those who have thrown in the towel are those who are small tenants in street to street malls and kiosk operators and those sorts of businesses.

I would estimate in the city of Port-of-Spain, about 10 per cent or 15 per cent of those small businesses.”

He agreed, however, that more could have been done by the Government.

“The Government could have dealt with a stimulus package for small businesses. COVID has been a tumultuous time and a damaging time for many. We have to pray there is no further lockdown foisted on us,” he added.

Last week, the Retailers Association of T&T lobbied for the re-opening of the sector, saying 78,000-plus employees have been on the breadline since April. They also said they have embarked on a vaccination drive for their employees and are 100 per cent committed to implementing all COVID-19 safety protocols upon re-opening.

When contacted for comment, the Ministry of Trade said it will issue a statement on the Confederation of Regional Business Chamber’s concerns later this week.